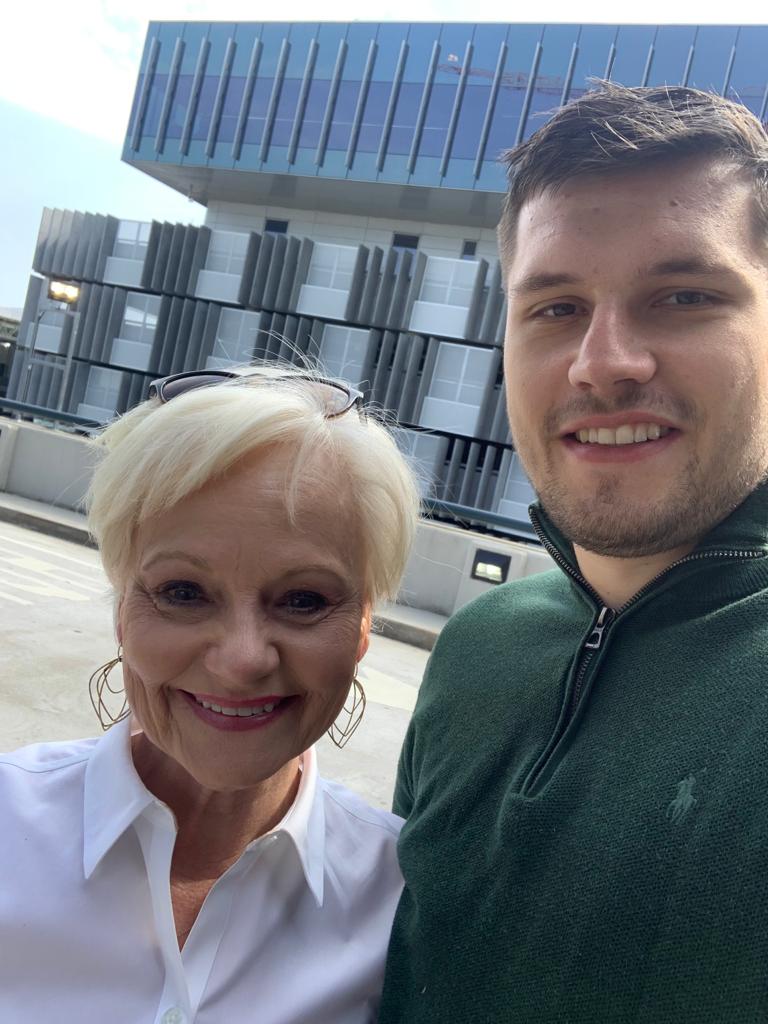 Sally Kimble knows the power of encouragement and generosity from mentors during her academic career. It’s her personal experiences with people who invested in her during her college years that led her to become a mentor for Cumberland student Carl Koester.

After her undergraduate studies, Sally worked at a local bank and quickly realized that she needed to study accounting in order to grow within the company. The Chairman of the Board for the bank Roy Wauford encouraged her to pursue accounting and told her that the bank would pay for her tuition at Cumberland.

Sally had many mentors in her life, both personally and professionally who instilled a deep understanding of the weight of others’ sacrifices.

Later in her career, Sally felt compelled to “pay it forward” as a way to thank her own mentors by helping young adults realize their full potential.

Several weeks before the Fall 2020 semester, Sally met with the Cumberland Office of Advancement about developing student mentorship opportunities. At this time, the new men’s soccer goalkeeper and an international student from Germany named Carl Koester, was acclimating to Cumberland and wanted to learn more about the mentorship program.

After their initial meeting, both Sally and Carl requested each other for the mentorship program and began speaking frequently. Every interaction was either online or by phone because of the pandemic. Despite the lack of face-to-face interaction, they found companionship in one another and spoke about many topics including career opportunities, family, social and political issues, and cultural similarities and differences.

“It has been great to learn from such an experienced and accomplished professional like Sally,” said Carl. “Over time, we developed a friendship, and she has helped me overcome enormous obstacles that I faced during my time at Cumberland.”

In the spring of 2021, Carl suffered a knee injury that required almost-immediate surgery.

“We didn’t realize at the time it was a career-ending injury,” said Sally.

When it came time for Carl to return to Germany, Sally remembers how difficult it was to see him at the airport in a leg brace and a wheelchair. They kept in contact throughout the summer, and when he returned to Lebanon for the fall, Carl stayed with Sally and her husband while having more surgeries.

“While it was so hard on him physically, it was a great time for David and me to really get to know him better,” said Sally. “At this point, Carl was family— an adopted grandson!”

Sally and her family were excited to see Carl secure an internship with the newly-established Nashville Soccer Club and receive the Outstanding Business Student award during the Spring 2022 semester. But as graduation came and went, a bittersweet feeling came with goodbye as Sally drove Carl to the airport on May 10, 2022.

“Our relationship is built on trust, on spending time together, respect and the belief that we have more in common than what separates us. We have mentored each other, learned from each other, and helped each other.”

Despite being 4,500 miles apart with a 7-hour time difference, they still keep in touch. Sally and her husband are even discussing a trip to Europe next year to see Carl and meet his family.

“As Carl has said, we have been blessed to move from mentorship to friendship,” said Sally. “We continue to share our lives with each other. I am so excited about Carl’s future and my opportunity to participate in his life!”

Sally’s willingness to mentor Carl and his eagerness to learn through the Cumberland mentorship program changed both of their lives for the better.

“Giving back is an essential part of society to pass on knowledge, offer opportunities, and provide growth to younger generations,” said Carl. “It is our responsibility to make this world a better place. Therefore, giving back is far more than just a monetary act but also devoting time, fostering self-belief and trust, and helping others to level up.”

Carl recommends all students consider being a part of this program saying, “The mentorship program at Cumberland gives students a chance to kick-start their careers, build a network and develop personally.”

For more information about the Cumberland Mentorship Program, click here.