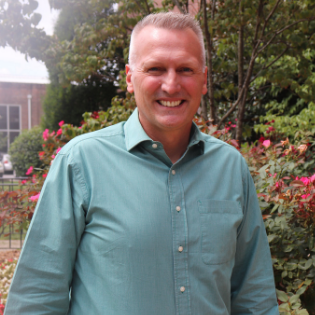 Teaching has always run through Matthew Espenshade’s blood. Growing up with an educator as a father ensured this. “Anytime we were out in public, we were always swarmed by his former students telling us that he was the best teacher they ever had,” said Espenshade. “He has lived his entire life saying, ‘Life is about how you treat other people,’ and always worked to do the same. It really developed in me a servant mindset.”

Espenshade enlisted in the U.S Army at the age of 17. He took advantage of the G.I. Bill and earned his undergraduate degree at St. Joseph’s University where he “learned how to learn,” and later completed his master’s degree at Norwich University. Still, he longed to accomplish a greater purpose.

After graduating, he returned to active duty with the army as a military intelligence officer where he worked with FBI agents on a daily basis. His new colleagues quickly became his friends and saw something special in Espenshade: a work ethic, a spark, a servant heart; someone who would be a perfect addition to the federal organization.

With some encouragement from his friends, Espenshade was one of the 100,000 applicants that apply to be a part of the FBI each year. On December 10, 1995, he was selected to fill one of the 500 elite spots.

After finishing his training at Quantico, Espenshade began his first officer assignment in New York City, the largest FBI base in the country, on the gang and drug squad. It was his second year on the job when he was asked to teach a training session in South Africa, and he was looking forward to a change of pace from the hustle and bustle of NYC.

“I had just stepped on African soil when Al Qaeda bombed the U.S. Embassy in Kenya,” said Espenshade. “The next thing I knew, I was back on a plane headed to Kenya to help the team that was there.” What was supposed to be a two-week stay turned into a three-month investigation. When he finally arrived back in the US, Espenshade was moved to the counter-terrorism task force and continued to investigate Al Qaeda members and their leader, Osama Bin Laden.

By 2001, Espenshade and his wife Lisa relocated to Texas to begin another journey altogether: starting a family. Then, tragedy struck. The September 11th attacks solidified Al Qaeda as enemy number one, and Espenshade was dispatched to Kabul, Afghanistan to see out the arrests of those responsible. “These were people that I had personally indicted while I was working in NYC,” said Espenshade. “I never thought in a million years I would meet them face to face, let alone in prison.”

Four kids and five years later, Espenshade was working as the supervisor of all FBI operations in West Texas, overseeing a wide array of cases. “It was a nice change for a while, but we really wanted our kids to experience life abroad,” said Espenshade. “I was offered the position of Deputy Legal Attaché in Nairobi, Kenya and we were off to Africa!” In the three years that they lived in the busy east African city, Espenshade investigated 140 terrorist attacks, including the Westgate mall shooting, which was located just ten minutes from his home. “We were actually on the way to the mall to meet our swim team friends after a practice when I received word of what was happening,” said Espenshade. “Our friends were in the parking lot watching people sprint out of the mall and heard the screeching sound of gunshots. It was more than just a close call.”

Eager to escape the ever looming threat of danger, the family moved to Budapest, Hungary, where they stayed for two years as Espenshade continued his attaché role in the Budapest embassy. “That’s where the kids experienced their first winter. They went straight from Texas to Eastern Africa and practically lived in flip-flops, so when it snowed for the first time, they were like ‘Dad, we need socks!’”

“They loved living overseas, but they especially cherish the time they lived in Nairobi,” said Espenshade. “They absolutely loved it there; heat and all. It’s just in their hearts!”

Eventually, it came time for the Espenshades to return to the states. “I put my name on a promotional list and we just prayed and prayed to be placed in Nashville,” said Espenshade. “We wanted to finally be in a place that other people actually wanted to live. You can’t imagine the relief we felt when I was offered the position!” In a two-week trip to the states, Lisa bought a house in Lebanon, enrolled the kids at Friendship Christian School, and bought two cars; leaving only long goodbyes and a 15-hour flight between them and the USA.

After 24 years of service, Espenshade was eligible for retirement. Espenshade was eager to continue to serve in some capacity, but wanted to be able to give his family a sense of stability and comfort. “Even in Nashville, I was taking calls at all hours of the night, and would be gone for days at a time,” said Espenshade. “We were all ready for a slower pace.” Almost by fate, Cumberland University’s Chief Mike Thornhill and former criminal justice program director Margie Quinn encouraged him to take a chance on an opening for a criminal justice instructor, which of course, he did.

“I just knew that being able to positively affect the next generation of law enforcement and criminal justice servants would be just as fulfilling, if not more, as working in the FBI,” said Espenshade. “I want police stations and crime scene units to be seeking out CU students to fill positions because they know they will be getting superior quality candidates.”

His new colleagues are equally as excited to see Espenshade and for him to bring his experience and knowledge to CU.

Dr. Eric Cummings, Dean of the School of Humanities, Education, and the Arts, is confident that Espenshade’s expertise will enhance CU’s criminal justice program. “Matt’s experiences complement the criminal justice program director Suzann Lafferty’s in ways that are so beneficial to our students. He has already made positive contributions in and beyond the classroom, and I am so excited to see what he and Mrs. Lafferty will do in the coming years to provide great learning experiences for our students.”

“Matt has a genuine concern for the students which is evident as he mentors and prepares them for careers in law enforcement,” said Suzann Lafferty, CU’s new program director for criminal justice. “Matt’s background is very interesting and he has a great sense of humor which will make learning in his classroom very exciting.”

Espenshade will spend the fall semester teaching Introduction to Criminal Justice and Terrorism and Homeland Security, combining his experience with facts will make the material/coursework come alive. With this teaching philosophy, his goal is that students will be able to understand the topics on a historical and analytical level. He also hopes to impress upon them the huge responsibility they will have as servants to their community.

“This is going to be an opportunity where I can impact future criminal justice professionals in a way that when they leave CU, they will be able to bring honor and integrity into their careers. I hope to instill in them the same principles that my dad and my career taught me: show people compassion, treat them justly, and always remember your ethical duty to protect and serve your community.”