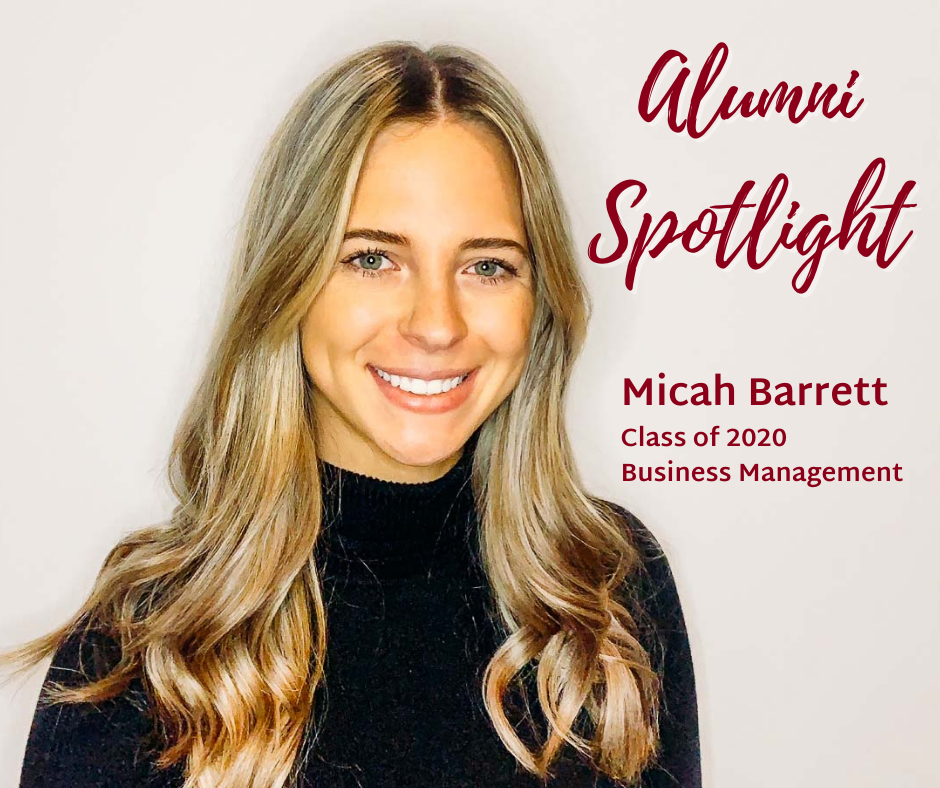 Micah grew up in the small town of Elmwood, Illinois and discovered Cumberland when she was recruited for the volleyball team. She graduated without debt because of several scholarships including the Presidential Scholarship, which she received for all four years, a volleyball scholarship and a scholarship for her time as a Presidential Ambassador.

When Micah enrolled at Cumberland, she quickly knew she wanted to pursue a career in law. After her first two years in college, she began studying for the Law School Admission Test (LSAT) and building her resume for law school applications. Among the many classes she enrolled in at Cumberland, she enjoyed Legal Business and Dr. Valerie King’s classes the most.

In the Spring semester of her Junior year, she began an internship at the Legal Aid Society of Middle Tennessee and the Cumberlands. After this, she began working for Griffin Law Office, Dr. Christi Griffin’s law office. As a first generation law student, being mentored by Dr. Griffin helped Micah understand what to expect from law school.

“Christi Griffin really took me under her wing and helped me get the law experience I needed to be a competitive candidate for law school,” said Micah. “I would not be where I am today without her confidence in me.”

Micah believes that the connections she made at Cumberland have shaped her into who she is today and set her up for success in her continued education and career.

“Cumberland has allowed me to make many connections in the community that I would not have made if I attended a bigger school,” said Micah. “I am very thankful for the teachers that helped guide me when I was pursuing law school and determining my post-graduation plans.”

It is Cumberland’s sense of community that Micah carries with her, even after graduation. She stays connected with faculty and appreciates how they care for their students.

“While Cumberland may not be a big school, nowhere else will you find faculty as genuinely invested in their students’ success than at Cumberland,” she said. “It means so much when teachers reach out post-graduation because they truly want you to do well in life.”

In addition to continued relationships with faculty, Micah has made many connections with students that keep her coming back to campus.

“I have made great friendships that will last a lifetime because of Cumberland,” said Micah. “I met my boyfriend of over two and a half years while at Cumberland. He is in his Senior year on the soccer team, so I visit Cumberland most weekends to watch soccer games and see friends who still attend the school.”

Although excited to be taking the next step in her academic career, she advised current students to immerse themselves in their first four years of college.

“It’s cheesy, but I wish I knew how much I would miss Undergrad while I was in it. Those 4 years truly do go by fast, and you will never get them back, so enjoy them while they last.”

Micah is now a second year law student at Belmont School of Law where she is pursuing the Entertainment and Music Business certificate. She previously worked for Music City Law in the Gulch and is currently working part time at Roger, Shea, & Spanos. She is also an Ambassador for Belmont Law and a member of the Women’s Legal Society and the Entertainment Law Society.

After passing the Bar, she plans to stay in the Nashville area to practice law.