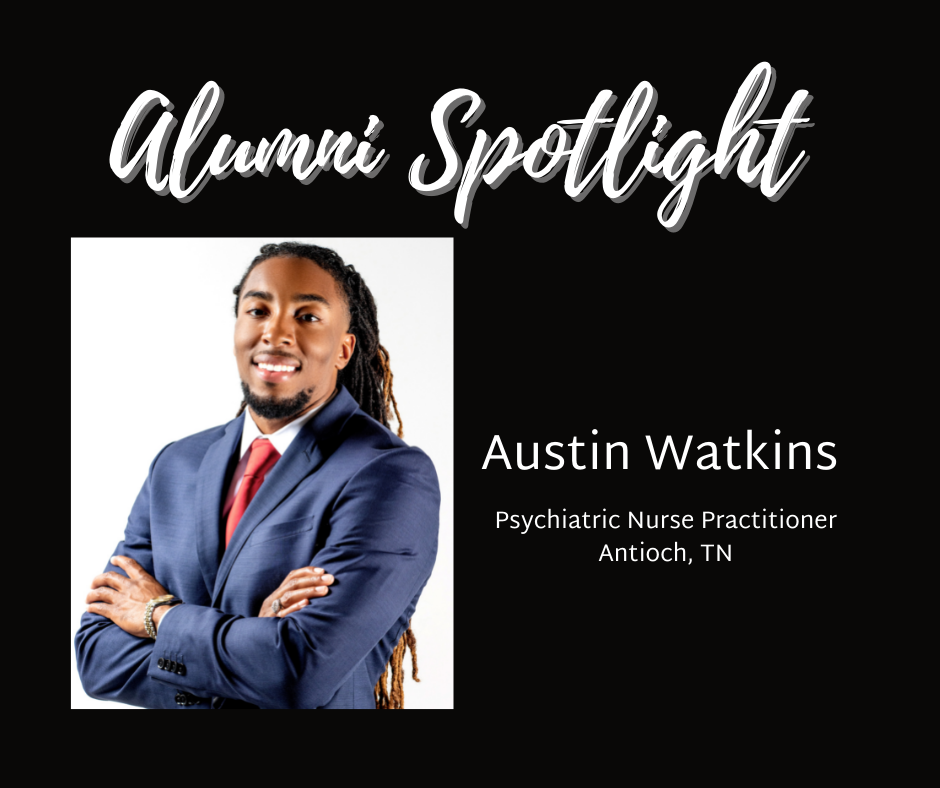 Stockton Scholar Austin Watkins received his Bachelor of Science in Nursing degree from Cumberland in 2017. During his time in graduate school in 2018, he founded the nonprofit, Dream Bigger Than Your Situation Foundation, to award college scholarships and establish mentorships with disadvantaged students. Originally from Decatur, Alabama, Austin lives in Antioch and works as a Psychiatric Nurse Practitioner at Generations Mental Health Center.

What were you involved in?

Why did you choose Cumberland?

I knew I wanted to go to nursing school so I visited Vanderbilt, Belmont, and Cumberland. I know it sounds cliché, but Cumberland felt like home and the price was more affordable than Vanderbilt and Belmont.

Are there any professors or classmates who impacted your journey?

The first semester, I struggled to adapt to the rigors of nursing school while working multiple jobs. The faculty wrapped their arms around me and lifted me up, especially Dr. Kimbrell and Ms. Kannon. They helped me find tutors and truly cared about my wellbeing, often asking how I was doing and asking about my family and work. The Library Director Mrs. Bettina Warkentin was always so nice to me when I would go to the Vise Library. We had friendly conversations and she helped me find sources for my papers.  After the first semester my grades were significantly improved and I graduated with a 3.2 GPA in 2017 with my BSN. However, I failed the NCLEX and I was so disappointed in myself especially since Cumberland has one of the best NCLEX pass rates in the state. All of my classmates passed on the first try. Dr. Kimbrell was one of the first people to call me after I failed. She encouraged me and helped me develop a study plan and find a tutor. I passed it the second time thanks to Dr. Kimbrell and my classmate Anna-Leah Warlick.

What was your path after graduating from CU?

After passing my NCLEX, I accepted a job at a nonprofit organization called Mental Health Cooperative where I worked in their Crisis Stabilization Unit. While working full-time I decided to go back to school at Union University to get my Master of Science in Nursing (MSN). During my time in graduate school, I started a nonprofit organization called Dream Bigger Than Your Situation Foundation to help empower people from disadvantaged backgrounds through scholarships and mentorships. In 2019, I graduated from Union University with my MSN and became a Psychiatric Nurse Practitioner. After graduation, I accepted a job at Generations Mental Health Center.

What do you know now that you wish you had known when you were a student?

Enjoy the journey and get involved in as many extracurricular activities with your classmates as you can.