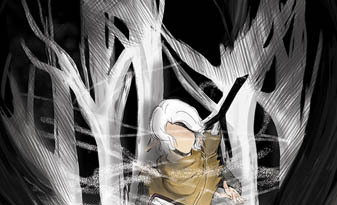 Senior art major Samantha Roddam’s exhibit, “The Making of a Monster,” opens Feb. 7 in the Adams Gallery. A reception will be held that evening from 4:30 – 6 p.m.

According to Peg Fredi, assistant professor and director of the Adams Gallery, Sam uses digital imaging, traditional art techniques, and graphic designs to tell a story. However, she not only tells a story, but questions the best way to tell it. She uses a linear method to reveal her process of telling a story from conception to delivery to the audience. She draws from her experience of theater as well as art to make her images.

In her artist statement about “The Making of a Monster,” Roddam writes: “The question isn’t, is this story really worth telling? The question is, is this the best way to tell it? I could easily write this down for you to read or stand up and recite it as an actor, as this is the way this tradition of sharing stories began. But these aren’t necessarily the best ways to tell my story. After walking into my show, The Making of a Monster, my hope is that you will be able to follow along and derive from at least one, if not more of my methods, the essence of this work and it’s themes as it was originally written without my having to outline and explain the entirety of the narrative.”

Roddam is a fine art major with an emphasis on entertainment and design and a minor in theater. She has performed in multiple Cumberland University theater productions, and her artwork has won awards in mixed media and painting. In 2017, she was the recipient of the CU Student Focus Show’s “Best of Show” award for her mixed media piece, “The World’s Dumbest Nightlight.”

“The Making of a Monster” will run through Feb. 16. The Adams Gallery in the Heydel Fine Arts Center is open from 8 a.m. – 5 p.m. daily. Admission is free.