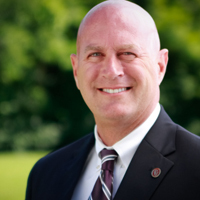 Paul Stumb, president of Cumberland University, has been appointed to the Founders Council of the MLS2Nashville committee, which is comprised of over 100 Middle Tennessee leaders working to bring a Major League Soccer team to Nashville.

“Dr. Stumb was named to this committee because of his contributions as a leader in the Nashville area as well as the ongoing status of CU soccer as one of the best NAIA programs in the country,” said Clint Brewer of Stones River Group and MLS2Nashville committee member.

MLS2Nashville represents an expansion and reorganization of the original Nashville MLS organizing committee founded by Will Alexander and Bill Hagerty in 2016. The group played a seminal role in launching Nashville’s pursuit of MLS, assembling corporate support for the bid, securing the July 8th Gold Cup at Nissan Stadium, and recruiting John R. Ingram, the lead investor for Nashville’s MLS expansion bid.

Cumberland University has one of the longest, richest histories of any higher education institution in the state. Founded in 1842, the University flourishes today with exceptional faculty and fully-accredited academic programs steeped in the liberal arts, including three distinct schools: the Rudy School of Nursing and Health Professions; the School of Humanities, Education, and the Arts; and the Labry School of Science, Technology, and Business. With a student body approaching 2,000, 25 percent of whom live on campus, our unique residential living and learning experience allows students to find their sense of belonging. Athletics also are a strength of Cumberland University, as its teams in 20 sports regularly compete for conference and national championships. Its world-renowned baseball team has claimed the NAIA national championship title three times since 2004. At Cumberland University you can Learn What’s Possible!