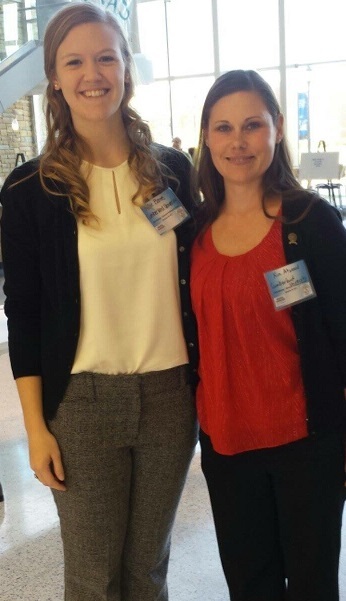 Kelsie Barnes, a Murfreesboro, Tenn., native and 2015 graduate of Cumberland University with a bachelor’s degree in science, conducted a directed research project with Kimberly Atwood, biology instructor and member of the Tennessee Academy of Science, in which they studied the purification of groundwater after it is filtered through a rain garden. The award-winning rain garden was constructed through a partnership between Cumberland University and the City of Lebanon.

According to the U.S. Department of Agriculture’s website, rain gardens are “depressional areas landscaped with perennial flowers and native vegetation that soak up rainwater.” They are placed in strategic locations to capture runoff from impenetrable surfaces, such as roofs and streets.

Labry Hall, which houses CU’s School of Technology, Science and Business, has two culverts that drain from two sides of the building. A collecting pipe was constructed to store the filtered water after it has been processed through the garden. The purpose of the rain garden is to naturally purify groundwater of certain pollutants. The concept behind Barnes’ research is that groundwater becomes significantly cleaner after it is filtered through the rain garden than it was upon initially entering the garden.

Alongside Atwood, Barnes collected samples from both the groundwater and the pipe of the rain garden. These samples were tested for pH, nitrate and phosphate levels and total solids, with the intended goal being to purify groundwater for the sake of cleaner watersheds, such as lakes, streams, and oceans.

Barnes presented her findings at the 125th meeting of the Tennessee Academy of Science in November, 2015, and successfully placed third in the Math and Science Teaching section. For this achievement, she thanks her instructor for her sponsorship and guidance.

“Although the research was interesting and more fun than I ever imagined, the lessons I took away from the research far exceeds it. Professor Atwood constantly encouraged me and supported me while allowing me to make many of the decisions needed during the entire process,” said Barnes.

Barnes also said she appreciates Cumberland University for allowing the construction of the rain garden on campus as well as for permitting the students to participate in research with their professors, expressing that the opportunity provided her with a unique experience that she will carry into her graduate studies.

“This rain garden will hopefully continue to be something future biology and biochemistry students can benefit from and gain experience from to further their knowledge and ability to perform research and experiments,” she said.