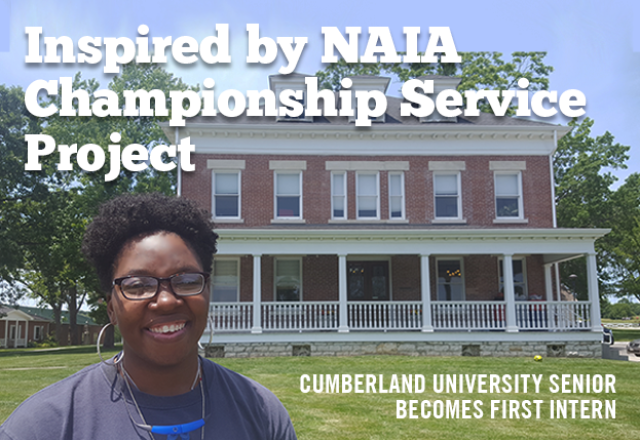 Established in 2000, the Champions of Character program was created to instill values of good character among coaches, student-athletes and parents. Teams at NAIA institutions take part in various Champion of Character activities as part of the Teaming Up for Character initiative.
“Teaming Up For Character is our Champions of Character program that allows our student-athletes competing for a National Championship to give back to the championship host community,” says Champions of Character Director, Kristin Gillette. “These programs are dedicated to character-driven intercollegiate athletics and the NAIA wants to showcase that around the country at our 25 National Championships.”
The NAIA Women’s Division I Basketball Championship Host teamed up for character with local non-profit Drumm Farms. Located on the outskirts of Independence, Mo., Drumm Farms houses foster children and their families. “Drumm Farm Center for Children helps children in foster care and homeless young adults build successful lives by providing housing, emotional support, educational services and opportunities for personal growth,” explains Lisa Moorhouse, Donor Development and Event Coordinator for the Farm. “Today Drumm Farm is home to nearly 50 children and provides services to more than 200 while operating a counseling center, animal and produce farm, and market open to the public.”
For the past two years, national qualifying basketball teams have assisted the farm in various activities including planting vegetables, taking care of farm animals and interacting with foster children. Shantanique Tolbert was especially inspired by these Teaming Up for Character experiences, leading her to become Drumm Farm’s first ever intern.
The Cumberland University forward knows a thing or two about character.  The Detroit native was the first in her family to graduate high school, not to mention attend college.  A true servant leader, she was thrilled to discover her team had been chosen to volunteer at Drumm Farm for a second year during the national championship.
“The first time we came it rained really badly, so we didn’t do too much.  We didn’t expect to come back, but we got picked to come here again.”
Despite the weather, Tolbert was inspired by Drumm Farm’s work. “It was crazy because  last semester I had a business operations class and I had a research project. By chance I chose Drumm Farm,” says the business administration major.  “I want to start my own non-profit for teens, so when I found out it was so dope because now I could ask questions.”
One of those questions was about the lack of similar organizations in other cities. Moorhouse explained the lack of knowledge about the program. “They were waiting on the right person. She gave me her information, and I knew I could be the person to help,” says Tolbert. “My assistant coaches encouraged me to find a way to work with them, so I sent Lisa an email about my connection with the farm. Lisa called me a week later and told me the Farm was creating an internship position for me.”
“Shantanique and I visited the last two years while her team was here,” says Moorhouse. “She was very interested in what Drumm Farm was all about and had great questions. It was her idea from the beginning as we haven’t had an intern working in her capacity before. It was a great idea, and I’m glad she made the inquiry.”
Through her internship, Tolbert has continued to learn about teamwork, responsibility and servant leadership. “My first week I learned how every part works from the market to administration. The dope thing about them is that everybody helps everybody. I’ve also learned to put myself in the right position and continuing to build my work ethic. I’m definitely not where I want to be five years from now, and I’ve got to be willing to get my hands dirty. I don’t have time to be lazy!” she laughs.
Tolbert hopes her experience will inspire her fellow student-athletes to help others. “I think the Champions of Character program means sticking to your values and your beliefs that convey humbleness and appreciation to those around you. By showing that is how you lay the foundation and example for the athletes behind you and future ones to come into this league.”
“I hope that people learn that when you go into something with an open mind anything is possible,” says Tolbert. “You never know the opportunities that basketball can be putting you in place for that may have nothing to do with the game itself.”