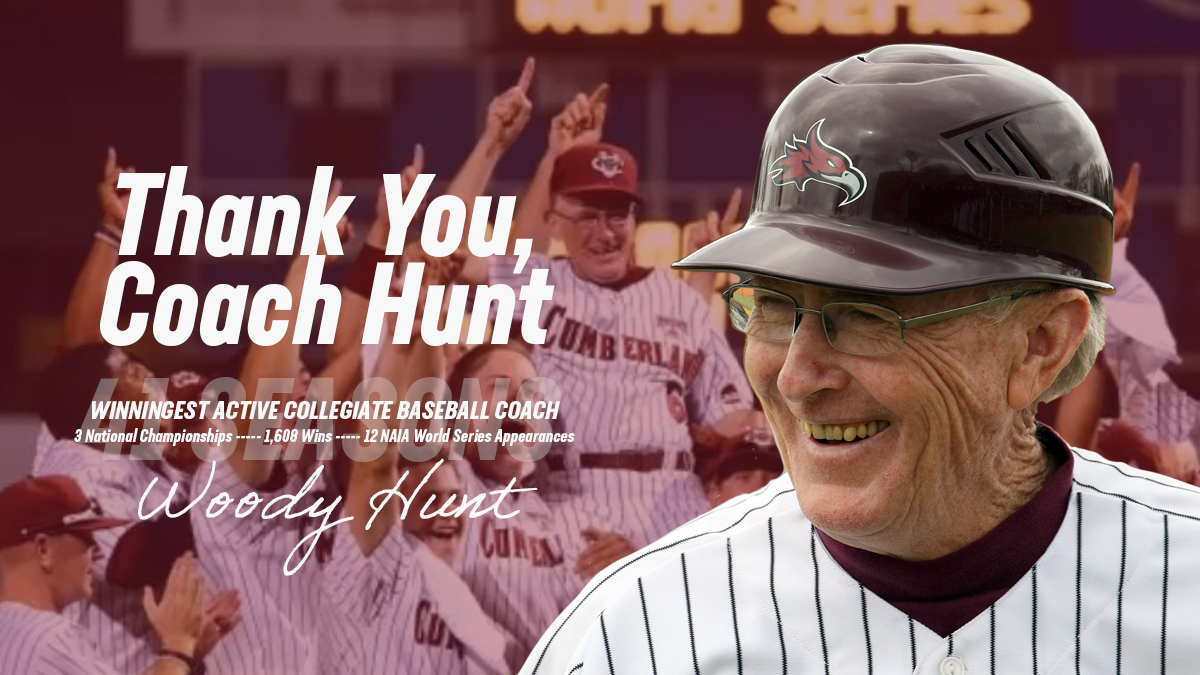 Cumberland University announced today that head baseball coach, Woody Hunt, will be retiring after the 2021 season. Hunt has spent 41 seasons as the CU head coach.

“Life is full of decision and changes, which affects a person’s life and those around him,” said Coach Woody Hunt. “After months of reflection, prayer and meetings with Cumberland administration, I have decided that 2021 will be my final season as head coach of the university’s baseball team.”

“It has been a great run and an unbelievable journey to be the head baseball coach at Cumberland,” continued Hunt. “God has blessed me beyond measure.”

Under his leadership, the Cumberland baseball team has captured three NAIA national titles in a span of 10 years, two national runners-up, 12 trips to the NAIA World Series, and 20 regular-season conference championships.

“Woody is a strong Christian man who has always cared about other people,” said Director of Athletics Ron Pavan. “When you visit with Woody it seems like he has a personal interest in you and your life. He makes every person feel special. It is not about his great accomplishments in his life but his humble character and love for others that makes Woody Hunt so special.”

Hunt has amassed 1,608 wins during his career with a win percentage of .680 during his tenure. He is one of six collegiate coaches to have over 1,600 wins in his career across all levels of collegiate baseball. He is currently the winningest active coach in college baseball.

Most recently, Hunt was awarded the Pat Summitt Lifetime Achievement Award by the Tennessee Sports Hall of Fame, which is presented to coaches who have led their teams in excellence, cultivating talent in athletes and are a shining example of mentorship and leadership within the sports industry.

He also received the Fred Russell Distinguished American Award in February 2020, which is the highest honor presented by the National Football Foundation and recognizes a local supporter of American values and the mid-state community. The award has been presented since 1969 and the list of recipients includes major politicians, country music celebrities, military officers, and leading citizens.

Hunt has coached 64 NAIA All-Americans and has seen 99 of his former players go on to sign professional contracts with two players making it to the major leagues thus far.

The Mid-South Conference presented Coach Hunt with the Coaching for Significance award in 2018 which is presented to a coach who is an outstanding teacher, an exemplary role model, and a dynamic leader.

In 2011, Hunt was presented with the Junie McBride “Mr. Baseball” Award by the Nashville Old Timers Baseball Association. This is the highest award given annually by the NOBA.

He received the Reese L. Smith Jr., Award presented by the Nashville Sports Council in 2010. The award is given to recognize an individual for their achievement and community service through their participation as a player, coach, administrator, supporter, and overachiever.

His legacy extends even further off the field than it does on the field as he is regarded as one of the best coaches at preparing his players to be great men after baseball. Many of his former players have grasped on to his teachings and are currently paying it forward to the next generation.

Hunt’s teams also are regularly involved in the community and with volunteer projects. Players regularly serve as mentors and help out with community clean up not only around Cumberland’s campus but the Lebanon community.

Cumberland will hold a special event in honor of Coach Woody Hunt’s retirement closer to the end of the season. Additional details regarding this event will be announced at a later date.