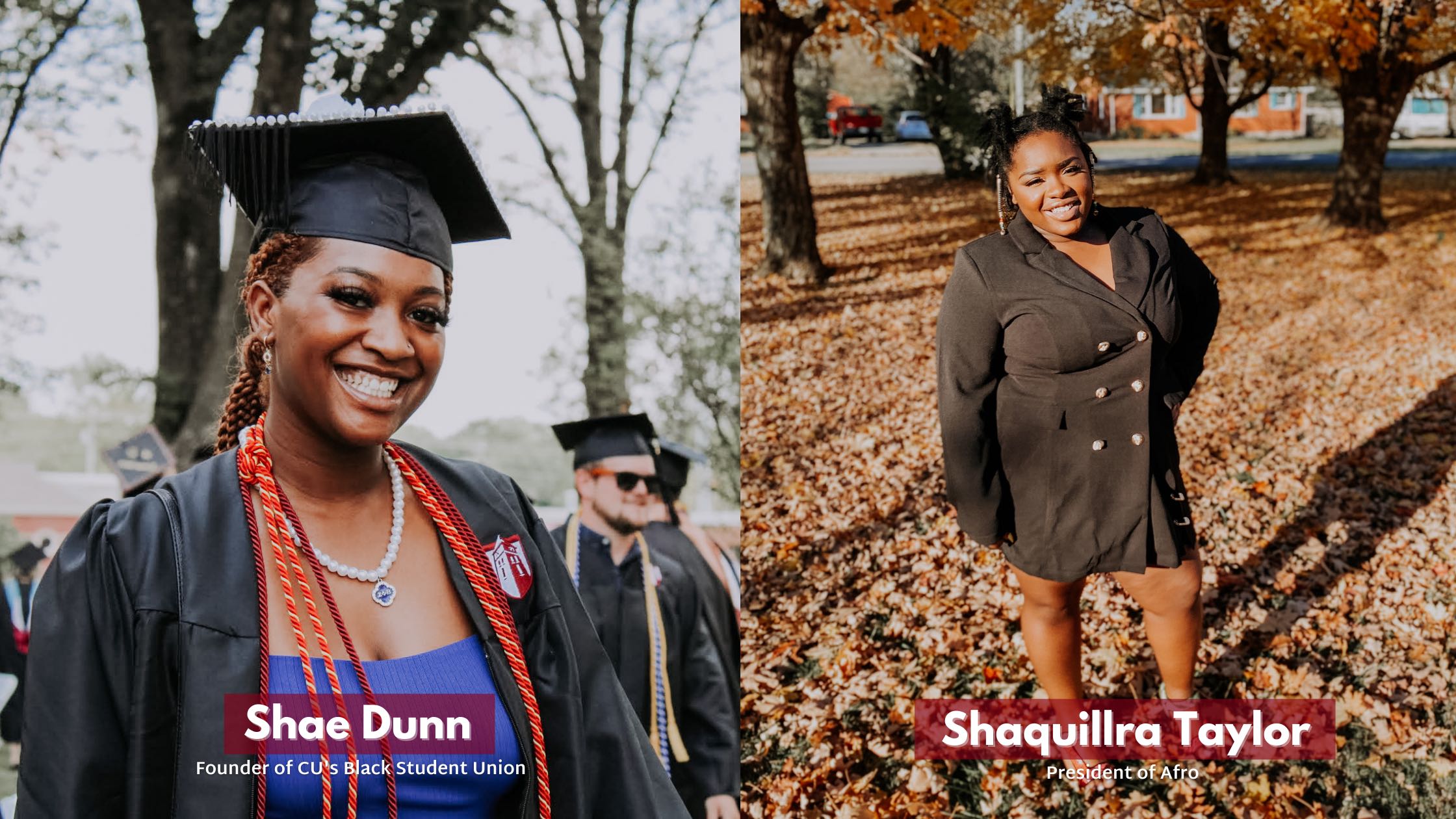 Shaquillra Taylor and Shae Dunn discuss their experiences as young, Black female leaders on CU’s campus as president of Afro and founder of the Black Student Union.

Intern with The Art of Life

For those who might be unfamiliar, what is Afro?

Afro is a student-led organization that allows us to come together to discuss issues that affect minorities and discuss what steps we can take to help alleviate them on our campus and in our society. Coming together as a group to discuss really important and relevant topics gives us all the opportunity to open our minds, consider others’ opinions and find solutions to move forward.

How did you get involved with Afro?

I was a member and then I was recommended for the president position by my friend Tk, who was the founder of Afro and an old classmate in the Haiti leadership course. She saw me as a leader in the class and knew that she’d be leaving it in good hands. I’ve been in the position for the last two years.

What are some of Afro’s accomplishments?

Afro has coordinated many Black History programs on campus and has worked with the Black History Committee of Wilson County to engage in various programs in our local community. Our Black History Month event from last year focused on police brutality and was very successful. Throughout the school year, we typically have small social events on campus, canned food drives, and partner with other groups on campus to make an even larger impact. This last semester we held voter registration events, played a pivotal role in the “I AM” movement and the Anti-Racism march on campus.

It just ignited something in me to want to help facilitate change there. That’s why I want to build a school there so that I can be a part of teaching small children how to be leaders. They’re the ones that will change the world.

What has your experience been as a young Black female leader on CU’s campus?

For me, it has been a sweet and sour experience. I’ve grown as a person and as a leader because the opportunities on campus push you to become a leader, but it’s difficult to balance being a good student with all of these demands. Being a good student and a good leader can be hard to juggle, but faculty members have helped me learn how to balance them well.

What’s some advice that you give your past self?

You’re only one person. It’s okay to ask for help.

What are your plans for the future?

I’d like to be a school counselor and take part in some clinical work. In the long term, I want to open a school and start a foundation in Haiti.

MAT program with an emphasis in Physical Education ‘2021

What role do you play with the Black Student Union?

I founded the chapter on CU’s campus. There was a need for a sense of community and belonging among Black students on campus, and I wanted to do something to create that. As we came together as one, we asked ourselves, “What can we do here and now?”. Dr. Janet Parker was our biggest supporter and has helped us become an established organization on campus.

What are some of BSU’s main goals?

We’re driven by doing community service and making sure everyone has access to the resources they need. We host a lot of canned food drives and coat drives to make sure people are taken care of on all levels. We also want to make sure that people feel included. While BSU is a space for Black students to learn, grow and flourish, it’s also a place for people of all races to come together to discuss issues that affect Black people and what we can do to help. BSU is so much more than a club; it’s something that’s here to influence change.

What has it been like to be a Black female leader on CU’s campus?

At first, I think it was hard for people to see me as a leader. I was always just the funny girl on the softball team, but I was also one of only two black girls on the whole team. I think it started there, where I was able to show some of my fellow teammates outside of their own privilege.

With everything that occurred within the past year, we stepped up as a Black-led organization and being able to be part of that was huge. There was such a fine line between being heard and being crazy, and it was important to us that we set the precedent of, “This is how we are going to handle this on our campus.” So, we organized donations and supplies for the marches that happened in Nashville and spent a day packing up backpacks to send there. That day, I looked around and grew teary-eyed realizing that we were part of something bigger than us. This was our time now, to be part of change, to be part of history.

When we had the marches on campus, I really saw how much passion there was on campus for change. It gave me hope for the future.

What are your plans for the future?

I want to be a teacher. I also want to have the best life possible for my son, Amir.