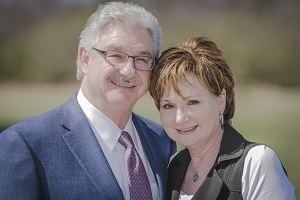 Ed and Susie James are the 2016 recipients of Cumberland University’s Algernon Sydney Sullivan Award.The Lebanon couple will receive the award at commencement on May 7.

The prestigious award, established by the Algernon Sydney Sullivan Foundation, is given to community members who selflessly serve others. Sullivan Awards are highly prized and have been awarded to people whose lives of service have changed the world with little fanfare as well as those who have become household names – recipients include First Lady Eleanor Roosevelt, television icon Fred Rogers, and Supreme Court Justice Lewis Powell.

Early on, both Ed and Susie showed signs of being go-getters in the community. At Friendship Christian School, Susie was voted “Most Likely to Succeed,” and Ed was voted “Most Popular” and “Most Cooperative” at Watertown High.

Since 1993, Susie has been the owner and general manager of the radio station WANT 98.9 FM/WCOR 1490 AM — Lebanon’s radio station which boosts the community in many ways. She was proud to discover that when tallying all of the community activities her staff of nine are involved with, the total came to 45. WANT also broadcasts Lebanon High School football games, Cumberland University sports, and is a tireless supporter of the Wilson County Fair, having broadcast from there since “before it was cool,” says Susie.

Ed holds a general contractor license and real estate license, and manages the couple’s real estate investments. The term “blood, sweat and tears” is not lost on him. He has donated more than 12 gallons of blood through the American Red Cross. Although he was motivated to be a blood donor after his father, the late Malcolm James of Statesville, needed a blood transfusion, he credits his mother, the late Esther Hight James of Norene, for giving him his lasting volunteer spirit. She spent several thousand hours as a volunteer at University Medical Center after her retirement.

One of Ed’s favorite sayings is, “There’s no smaller package than someone wrapped up in himself.”

Susie’s roots in Lebanon run deep. The lovely yellow house at West Spring St. and South Tarver Ave. across from Cumberland’s baseball field, belonged to her stepfather, the late Bill Barry, since 1931. Her mother, Joyce Bobo Barry, still lives in the home. Joyce’s parents were Alex and Vera Bobo, and her grandparents were Horace and Allie Mae Ligon. The Ligon and Bobo Funeral Home on West Main St., originally built in 1828 for Robert Caruthers, founder of Cumberland University, is still in existence today.

Today, the James family’s connection to Cumberland is stronger than ever. Besides Ed and Susie’s philanthropic and volunteer support of the university, Susie’s son, Christopher Bay, earned his master of business administration from Cumberland and her daughter, Chelsea Nyce, is currently earning a master’s degree from CU.

Dr. Paul Stumb, president of Cumberland University, is proud to call the James’ his friends:  “Ed and Susie James represent the essence of the Algernon Sydney Sullivan Award. Their concern for others, their willingness to step up and provide leadership to numerous causes, is not only impressive, it has motivated others to also make a tangible impact on this community.”

Susie said, “We were both honored and humbled when we were told we had been chosen for the Algernon Sydney Sullivan Award. There are so many individuals and businesses that work together to make this the best place to live. We are blessed to be a small part of this community.”