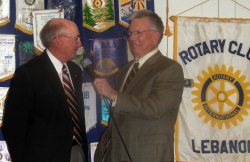 Hunt has served on the baseball staff at Cumberland for 30 years, three as an assistant in 1978, ’79 and ’81 and then as the head coach since 1982. CU was a two-year school during his first two seasons and became a four-year institution beginning with the 1984 baseball season.

The Belmont University graduate has compiled 1,193 victories in 27 seasons as head coach at CU and an 1,132-463-3 mark as head coach since 1984. He is one of only six coaches to register more than 1,000 career victories in the NAIA (National Association of Intercollegiate Athletics).

“I had no idea. I don’t know what to say,” Hunt said when notified of the honor at Tuesday’s Lebanon Rotary Club meeting by Hall Director Ryland Hoskins. “I’m a little overwhelmed. There are a lot of very deserving people who are in the Hall of Fame, and it’s an honor to be included with such great people.”

He is a seven-time Southeast Region Coach of the Year (1988, 1993, 1996, 1997, 2004, 2005 and 2008) and has also been a finalist for the National Coach of the Year Award four times. Seventy-two of his former players have signed professional baseball contracts, and the program has produced 51 NAIA All-Americans during his tenure.

This marks the fifth Hall of Fame in which Hunt will be inducted. He has previously been inducted into the NAIA, Cumberland, Boyle County (Ky.) and Tennessee Baseball Coaches Association Halls of Fame.