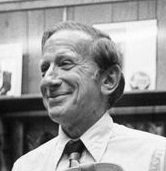 Cumberland University lost a dear friend this week when Mr. Harry Vise passed away on Wednesday, August 26 at the age of 94.

Mr. Vise was a successful business man who participated in a host of charitable causes and institutions, one of which was Cumberland. The University library is named in honor of him and his wife, Doris, and in 1987 Cumberland bestowed upon him an honorary doctor of arts in business administration.

In 1950, Mr. Vise opened the Texas Boot Company in Lebanon, Tenn. The company eventually became one of the country’s best selling boot enterprises. Shortly after his arrival in Lebanon he accepted an invitation to join the Cumberland Board of Trust thus becoming the first Jewish member of the board. His acceptance of that invitation was contingent on racially integrating the school.

“The University is grateful for the long service that Mr. Vise gave as a trustee and benefactor. Few individuals have served this institution in the many ways that he did through the years. Our library bears the name of he and his wife.” said Mr. Bob McDonald, Chairman of the Cumberland University Board of Trust. “Our thoughts and prayers go out to Doris and the Vise family during this time.”

He is survived by his wife of 65 years, Doris, as well as his children and grandchildren.

Funeral services will be held on Friday at 2 pm at The Temple, located in Nashville at 5015 Harding Pike. Following burial at The Temple Cemetery, the Vise family invites you to join them at The Temple for a gathering of family and friends.