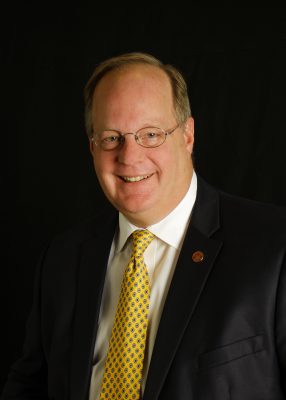 Rusty has been at Cumberland University since November 2011 serving as the Vice President for Advancement and later in his current role as Executive Director of Community Relations & External Affairs. He is a seasoned veteran with almost 40 years of experience working in the non-profit sector.

In his current role, Rusty is responsible for the many of the major events held by Cumberland such as the Phoenix Ball, Notes for Nurses, and Founders’ Day celebration. He also serves as the representative for Cumberland University at many local events in the community.

Prior to coming to Cumberland, Rusty served as president of the Phi Delta Theta Foundation headquartered in Oxford, Ohio.

Rusty is active with the Lebanon Rotary Club having held the offices of President and Treasurer. He and his wife Kathy belong to the First United Methodist Church. He is an avid racquetball player and fisherman.