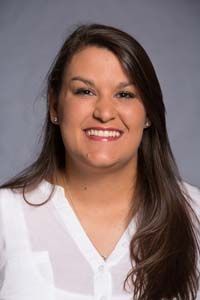 Former All-Conference infielder Stephanie Theall (formerly Gutierrez) joined the Cumberland staff as a full-time assistant in January 2016. This marks her eighth year as an assistant coach at her alma mater. She has spent ten of the last 11 years at Cumberland as either a student-athlete or coach.

The Orlando, Fla., native spent a year-and-a-half on the staff at Centre College in Danville, Ky., with the Colonels compiling a 14-18 record in 2015. She coached one Second Team and one Third Team All-Conference player as well as an Honorable Mention All-Conference performer while at Centre.

Gutierrez served as a student assistant at CU during the 2012 season after finishing her playing career and was a graduate assistant for the 2013 and 2014 seasons. Cumberland posted a 37-22 mark in 2013, advancing to the NAIA Championship Opening Round for the first time in program history.

Gutierrez earned a bachelor’s in Sports Management from Cumberland in 2012 and a master’s in Sport and Exercise Pedagogy at CU in 2014. She married former Cumberland football player Grant Theall in January 2016.