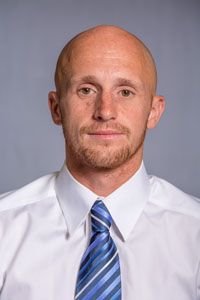 Davidson spent the last year serving as head coach for Nashville Rhythm FC in the Women’s Premier Soccer League as well as serving as Age Group Director and Lead Coach for the Nashville United Soccer Academy. He was also the Assistant Executive Director/Director of Coaching for the Williamson County Soccer Association for one year.

He worked the 2015 season as an assistant men’s coach and goalkeeper coach at Emmanuel College in Franklin Springs, Ga., assisting with team and individual workouts as well as recruiting. The Lions earned a berth in the NCCAA National Tournament that season, finishing the year 7-9-3 overall.

Davidson spent the 2014 campaign as assistant men’s coach at Truett-McConnell College in Cleveland, Ga., serving as camp director as well as leading recruiting for the Bears.

He worked two years as a graduate assistant for the women’s program at Trevecca University, helping the Trojans improve from 4-11-2 in 2010 to 8-8-2 the following season. Davidson also spent two years as an assistant for the men’s team at Bryan College, with the Lions registering marks of 12-4-2 and 11-8-0 in 2008 and 2009, respectively.

The Newarthill, Scotland, native played collegiately at Bryan College, scoring 23 goals with six assists as a senior to earn Honorable Mention All-America honors. The Lions compiled a 49-26-3 mark during his four seasons in Dayton.

He received his bachelor’s in Communications from Bryan College in 2008 and earned a master’s in Teaching K-6 from Trevecca in 2013. He has earned USSF National “D” and “E” coaching licenses as well as Goalkeeping Levels I and II from United Soccer Coaches (formerly NSCAA). He has also received a Director of Coaching Diploma and Advanced National Diploma from the USC.