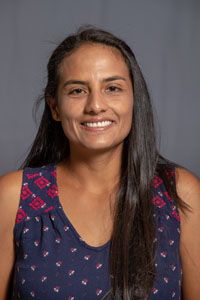 Karen Martinez joined the Cumberland staff as head coach for Men’s and Women’s tennis on June 30, 2017.

Before joining the Cumberland family coach Martinez has served one year as head coach for men’s and women’s tennis at Central Christian College in McPherson, Kan. The Tigers participate as an independent athletic program in the NAIA and also in the National Christian College Athletic Association.

She spent one year as an assistant coach at NCAA Division II Emporia State in Kansas, planning road trips and scheduling matches while also handling most of the international recruiting process for student-athletes to the program.

She is a native of Bogota, Colombia, where she was ranked in the Top 5 nationally throughout her junior career. Martinez started her collegiate career at Bethel University in McKenzie, Tenn., advancing to the NAIA Championships in 2009, and played her junior and senior seasons at NCAA Division I USC Upstate.

While finishing her degree and for a year after graduation, she worked as the Junior Tennis Director at The Westside Club in Spartanburg, S.C., before spending almost a year as the Head Tennis Pro at Medlock Bridge Tennis Center in Johns Creek, Ga. She served as an assistant coach at Agnes Scott while also working at Medlock. Martinez also spent 18 months as the Junior Program Director at Tennis Stage Colombia in Bogota before returning to the states and taking the position at Emporia State.

She earned her bachelor’s in Physical Education with a concentration in Exercise and Sports Science from USC Upstate in 2012 and completed her master’s in Business Administration from Kansas Wesleyan in May 2017.

Coach Martinez is married to Thiago Oliveira the head Men’s tennis coach at Cumberland University. They have two children: Lucca and Lorenzo.