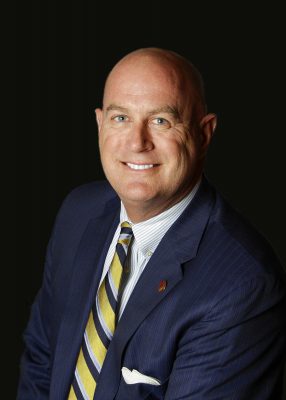 Dr. Paul Stumb was named as the 26th President of Cumberland University in August 2015. He has served Cumberland University since 2003, when he became an Adjunct Professor for two years before being named Dean of the Labry School of Science, Technology, and Business, a position he held for 10 years before he was named president. During his tenure as president, Cumberland has seen record enrollment and the addition of over 40 new faculty members.

Prior to joining Cumberland University, Dr. Stumb enjoyed a successful career in the for-profit business sector, serving in a variety of increasingly responsible positions including: Director of Marketing and Business Development for Georgia Pacific Corp, General Manager of American Corrugated, Vice President for Operations and Owner of One Coast Network, and Regional Vice President for Curtis 1000 Inc. Earlier assignments included work in the nuclear industry with Lockheed Martin Energy Systems, and 26 years of service in the US Navy Reserves, where he retired with the rank of Commander.

Dr. Stumb is a graduate of the Navy War College Strategy and Policy Program, and holds a BS in Engineering from Auburn University, an MS from the University of Tennessee, Knoxville, a Master’s in Education from Cumberland University, and earned his PhD at the University of Tennessee, Knoxville.  Before joining CU, he served as an Adjunct Professor for the National Security Agency, Georgia State University, Shorter College, and Middle Tennessee State University. He is a member of a number of professional and honor societies, and deeply engaged in several civic and professional activities.

Dr. Stumb is married to Dr. Cristy Stumb, a CU alum and former faculty member, who now owns and operates Stumb Healthcare Professionals, a primary care clinic in Carthage, TN. Together; they have four children and four grand-children. 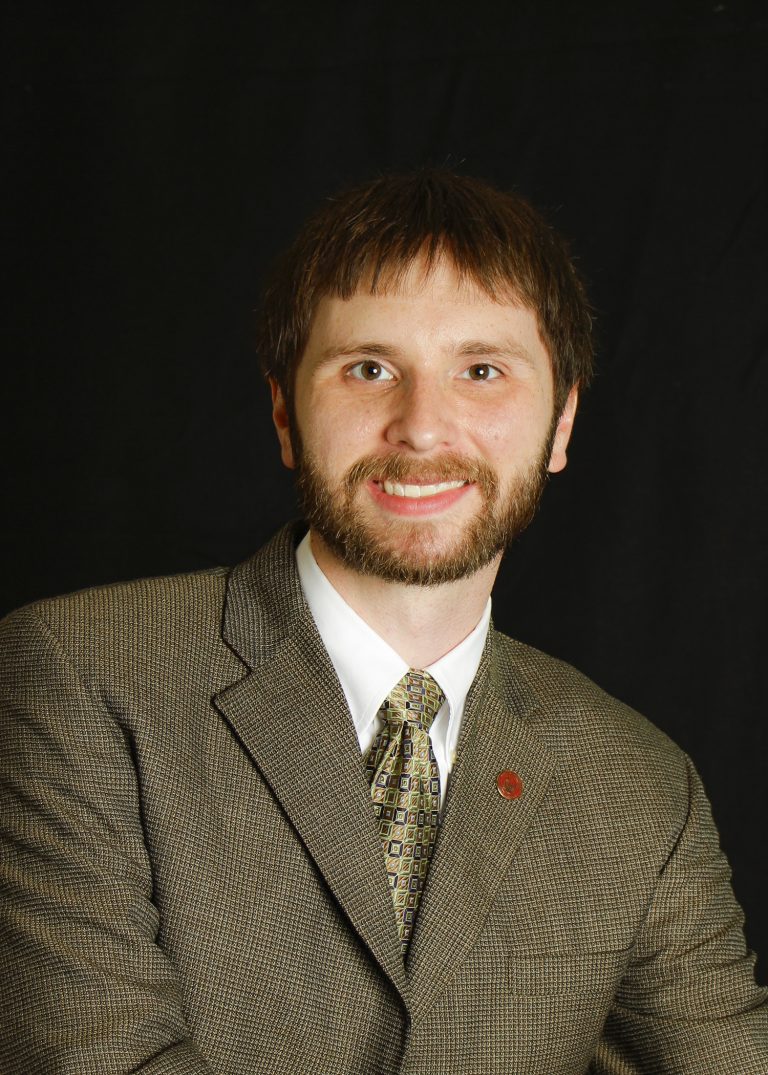 Dr. William Tune joined Cumberland University in the Fall of 2017 and teaches courses in the Mathematics program.  Prior to this, he taught mathematics courses at Motlow State Community College and Indiana University, where he received the Rothrock Teaching Award in 2013.  His research interests are in the field of Mathematical Logic, especially as it applies to natural language, the λ-calculus, and coalgebras.  He received the Robert K. Meyer Graduate Fellowship twice for his research into creating a calculus for representing monotonic patterns in natural language.

Dr. Tune also has a Bachelor of Science in Mathematics from the University of Tennessee, where he was a member of the Chancellor’s Honor program and the Mathematics Honors program.  He participated in two summer undergraduate research experiences, and was selected by the Mathematics Department faculty as the 2010 Outstanding Graduate.

In addition, he has co-authored two papers: Eigenvalues and Transduction of Morphic Sequences (2014) and A Monotonicity Calculus and Its Completeness (2017). 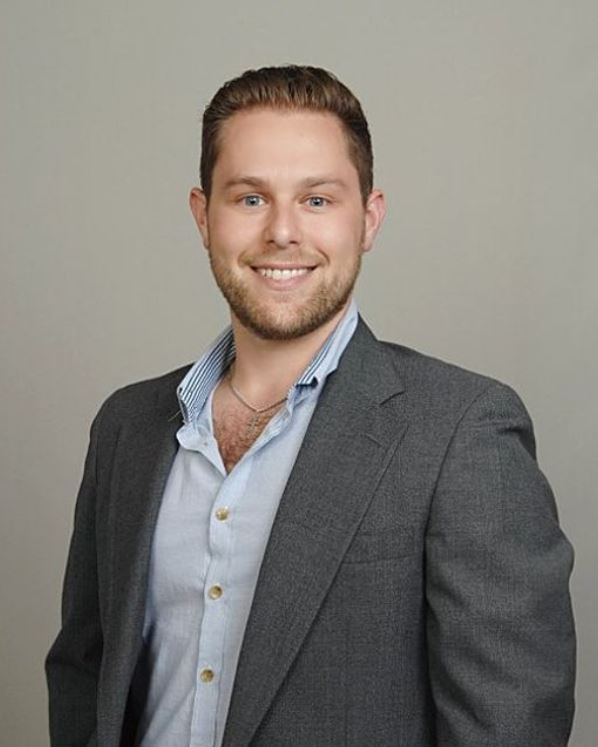 Dr. Noa D Stroop grew up in Wilson County, attending MJCA. He later acquired a BSBA and MBA from Tennessee Tech University. Finally, he earned his DBA from Trevecca Nazarene University, concentrating in Higher Education Leadership. His work history includes almost 10 years in the food service industry and an equal amount of experience in sales, marketing, and management capacities.

Dr. Stroop is a self-proclaimed ‘goal-getter,’ having made a memory in all 50 states by 27 and earning a doctorate by 30. He is currently achieving his dream career of teaching college students leadership and life principles in his hometown while building a consulting firm specializing in small business growth acceleration//entrepreneurship and coaching his high school alma mater’s soccer team. He is an active member of Joy Church, residing in his hometown of Mount Juliet with his lovely and brilliant wife, Nicole, and corgi-pup, Winston. If he isn’t at CU, consulting, or coaching soccer, he is likely to be at a concert, on a river, starting a business, bingeing a show with his wife, or gaming. 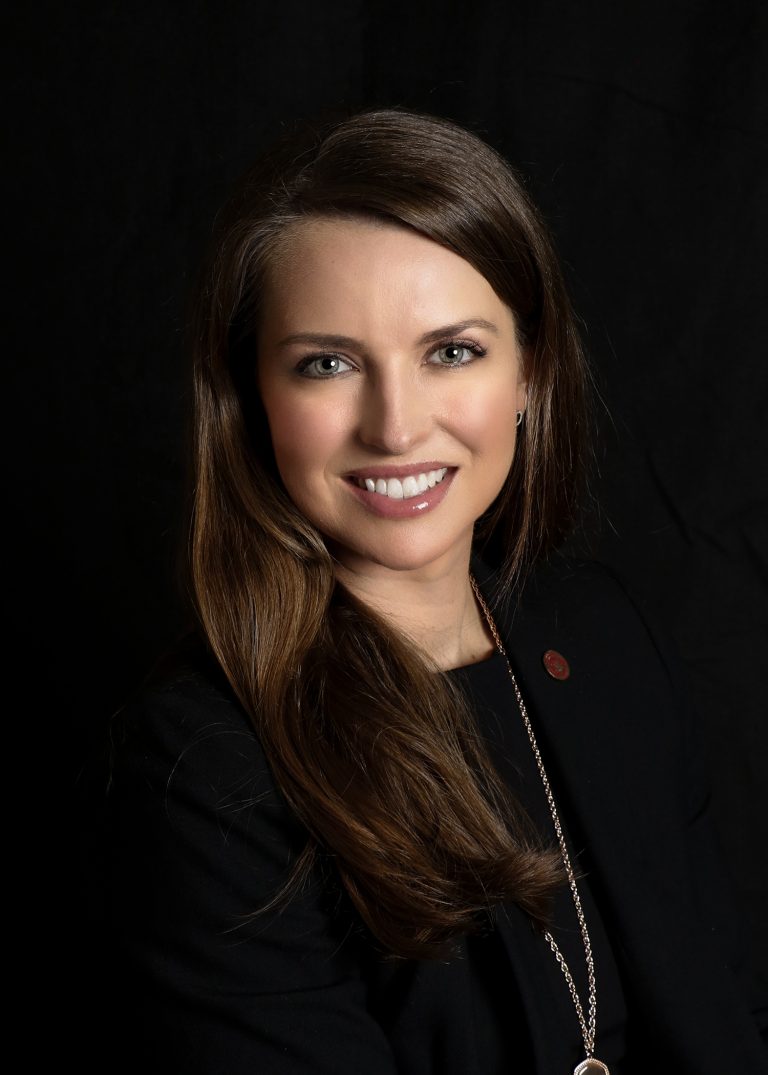 Ms. Karah Sprouse began at Cumberland University in fall of 2014 as an adjunct instructor and joined the full-time faculty in spring of 2018. She teaches various business classes in the undergraduate business program and serves as program director for the AAB program.  Prior to arriving at Cumberland, Ms. Sprouse was a PMP certified project manager in the software industry managing large-scale implementations.

Ms. Sprouse holds a Bachelor of Science degree in business administration from the University of Tennessee, Knoxville and an MBA from the University of Mississippi. She is currently completing her Doctorate of Business degree with plans to graduate in the summer of 2020. She also maintains her Project Management Professional certification. 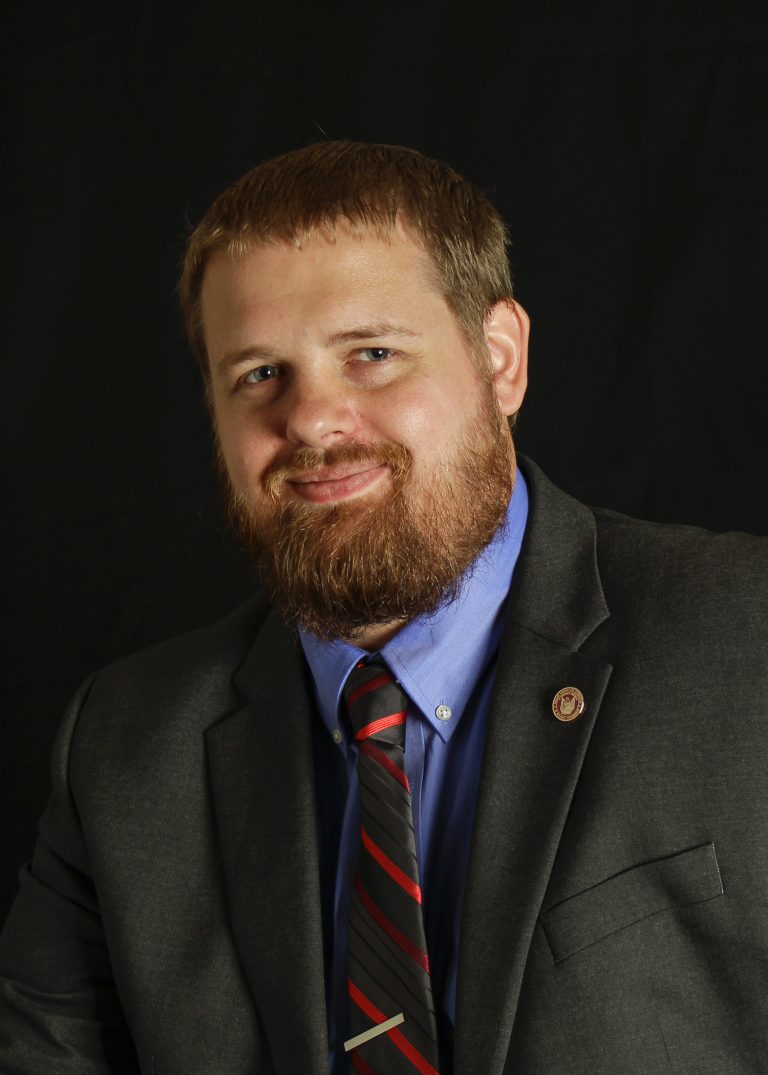 Milton Sager earned a Bachelor of Science from SUNY Fredonia College (2010) with a major in mathematics. He earned a Master of Arts from MTSU (2013) in applied mathematics. His thesis was the research and development of a Switched Reluctance In-Wheel Hub Motor which was the first interdepartmental thesis between the Math and Engineering departments at MTSU. The concept was to put an electric motor inside the rear wheel of a motorcycle eliminating the gasoline engine. He began teaching at Cumberland University in August 2015. Prior to this he had taught at MTSU, NSCC, and Belmont University.

Other than teaching math, his hobbies include backpacking, collecting vintage Star Wars memorabilia, and woodworking. He has consulted several small businesses such as B&B Metal Works, Paul’s Rocket Stoves, and a few cottage backpacking gear start ups on the math and engineering aspects of some of their projects. He runs a men’s small group through his Church. He and his wife have two children and live in Murfreesboro. 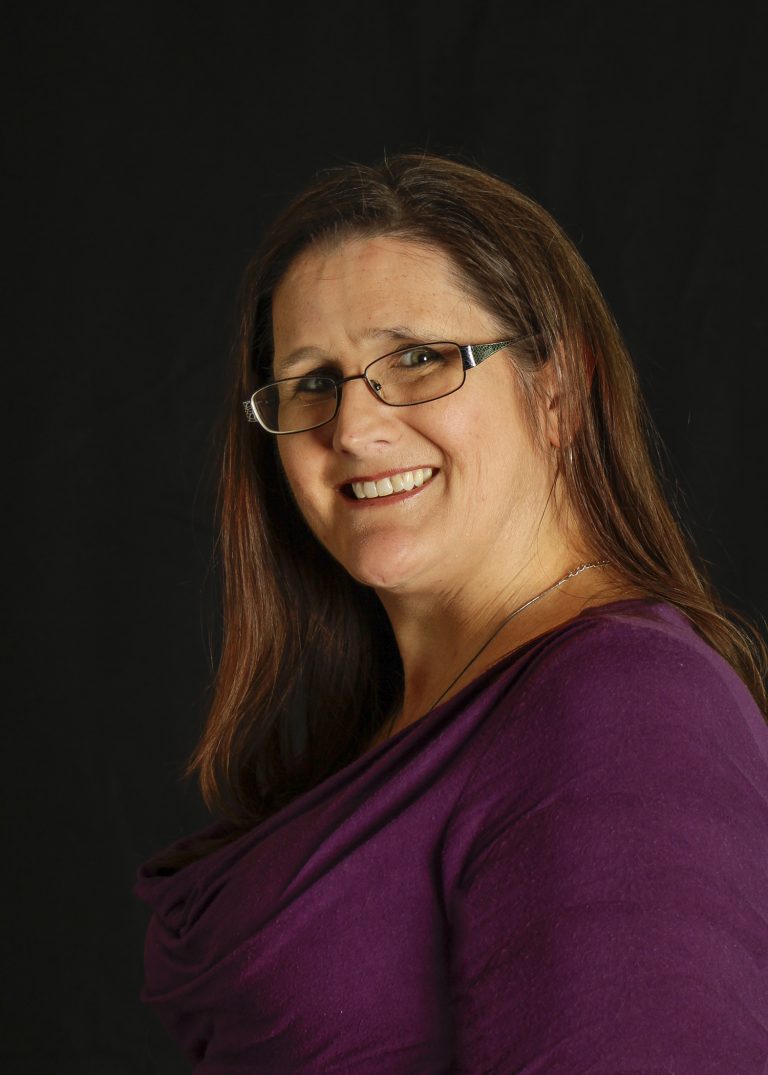 Connie Sink is a twenty plus year resident of Lebanon with three children. Connie worked, for over ten years, as a guest relations representative in a corporate environment as well as an administrative assistant in the religious, non-profit sector.  Her career at Cumberland University began in 2009. She recently completed her AAB here at Cumberland, and will continue working toward earning her BBA. Connie is active in the Cumberland University community, serving on committees as well as partnering with faculty and other staff members in event planning on campus. Along with her CU community involvement, she and her husband have served as ministry leaders for Celebrate Recovery, an addiction recovery ministry, in their local church for the last ten years. 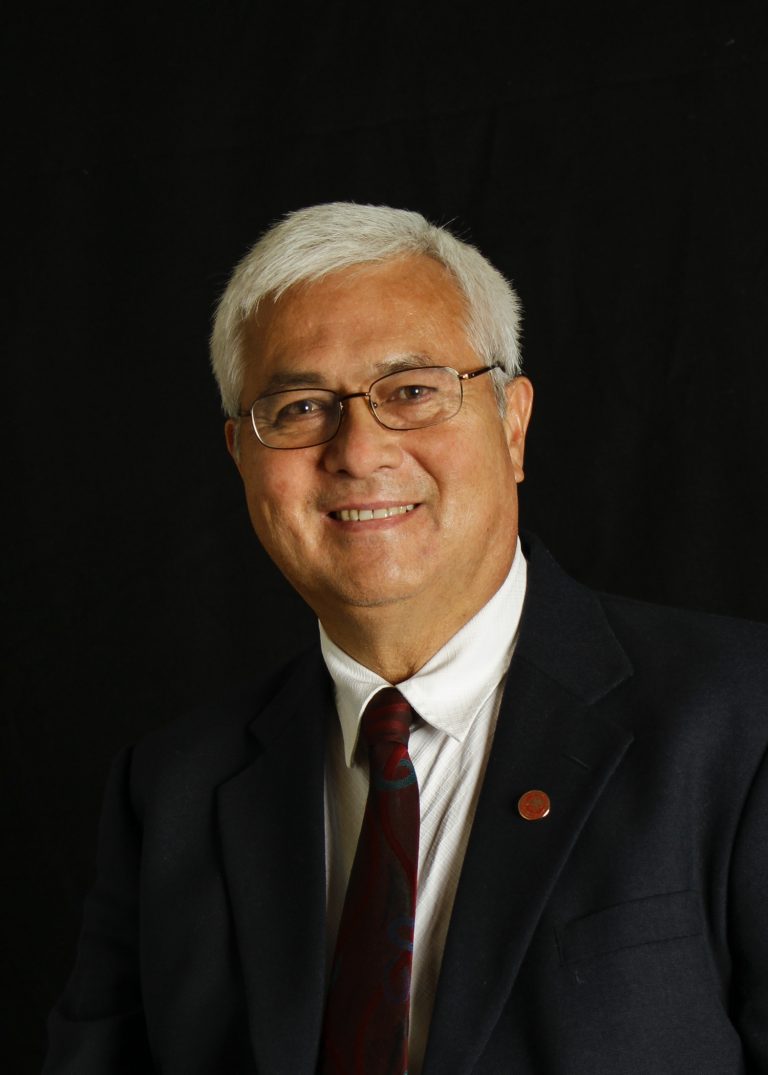 Stephen P. Shao, Jr. is a college professor/administrator, researcher and technical consultant.   He joined Cumberland University as a full time faculty member in 2017 after serving as an adjunct instructor for several years.  Dr. Shao holds a Ph.D. degree in Management Science from the University of Maryland, an M.B.A. in Business Administration from Old Dominion University, and a B.A. in Mathematics from the University of Virginia.  He has received additional training from courses, institutes and industry workshops at the University of Minnesota, AT&T Bell Laboratories and Bell Northern Research.

Dr. Shao has served as a faculty member and taught graduate and undergraduate courses in mathematics, computer information systems, marketing, project management, operations management and economics at universities in Maryland, Tennessee, and Virginia.  Dr. Shao is a founding director of two university research centers and currently serves as founding editor of the CU Labry School’s business publication Wilson County Trends. Before his current academic activities, Dr. Shao was employed in the telecommunications industry as a member of technical staff at AT&T Bell Laboratories in Holmdel, NJ and later as Senior Manager of Strategic Network Planning for the Canadian telecom manufacturer NorTel Networks’ U.S. operations headquartered in Nashville, TN.

Dr. Sarah Pierce is the program director of the Biochemistry program.  She received her Bachelor of Science degree in chemistry from the University of Tennessee at Chattanooga and her Ph.D. from Vanderbilt University.  Her postdoctoral work focused on breast cancer research with the Biomedical Engineering Department at Vanderbilt University. She began at Cumberland University in the Fall of 2008.  She teaches the Fundamentals of Chemistry, General Chemistry, Organic Chemistry, and Chemistry Senior Seminar. Dr. Pierce is passionate about chemistry in art and includes many art based laboratory experiments in her classes.  Dr. Pierce serves on the General Education Core Committee, the Assessment Committee, and is the chair of the Colloquium Committee. She is also the advisor for the Pre-professional Society.

Dr. Pierce focuses her research interests on analytical chemistry and chemical education.  Specifically, she is interested in the analysis of mixtures using visible spectroscopy.  Dr. Pierce has had several publications in various scientific journals and has made presentations at many chemistry conferences to discuss her education research. Recently, her research titled “Supplemental Learning in the Laboratory:  An Innovative Approach for Evaluating Knowledge and Method Transfer” was published in the Journal of Chemical Education.