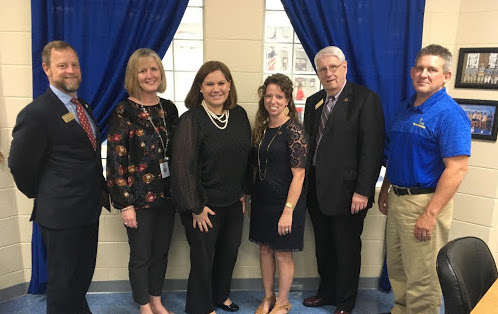 Dr. Andrea Ramirez from the United States Department of Education visited Tennessee in early September, including a stop at Cumberland University and Wilson County Schools (WCS). Dr. Ramirez holds a dual role as both the Acting Director of Center for Faith and Opportunity Initiatives, and Acting Deputy Assistant Secretary on Outreach at U.S. Department of Education.

Through a personal contact at the University, Dr. Ramirez learned about the “innovative” approach to the delivery of dual enrollment courses between the University and the School system.

“We have just been working hard to deliver rigorous college courses to academically prepared high school students any way we can,” said Summer Vertrees, a member of the Cumberland University faculty who has been teaching dual enrollment English courses at Wilson Central High School for four years. “It’s great to get affirmation from the United States Department of Education that what we’re doing is also considered innovative.”

Dr. Ramirez had lunch on Cumberland’s campus and then met with members of Lebanon Special School District’s (LSSD) Parents as Teachers program. LSSD was represented by Dr. Penny Thompson, PreK Director & Instructional coordinator, Beth Petty, Family Resource Center Director, Ronie McPeak, Family Engagement Director, and two participant moms from Parents as Teachers who also brought their children. After her meetings Dr. Ramirez praised each organization for their work individually, as well as the strength of the partnership between the three.

“We’ve been a highly rated teacher education program for many years in part because Cumberland is fortunate to have Wilson County Schools and the Lebanon Special School District to partner with,” said Dr. Eric Cummings, Dean of the School of Humanities, Education, and the Arts at Cumberland. “The way our three organizations have worked together over the years has been a win-win-win situation: the partnership benefits Cumberland, the school districts, and students from Pre-K through a Master’s degree.”