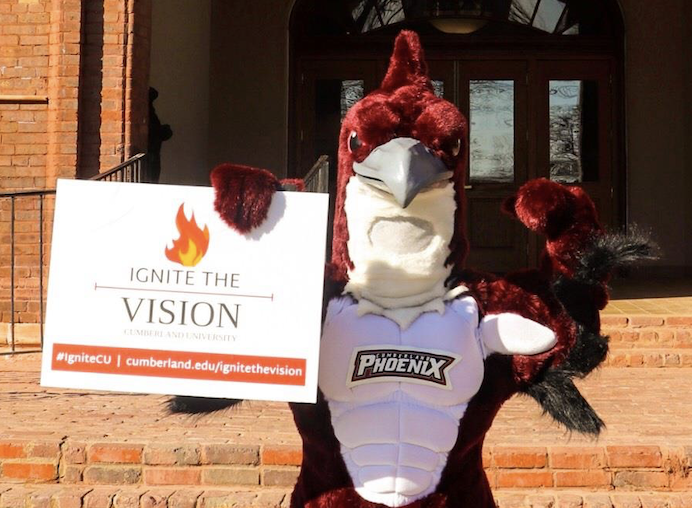 Cumberland University announced today that its #IgniteCU crowdfunding challenge reached its goal of raising $10,000 towards the Ignite the Vision major gifts initiative.

The challenge, which began at midnight Monday, February 25 and ended at 11:59 p.m. on Thursday, February 28 was powered by a robust crowdfunding and social media strategy that showcased the four components of the larger Ignite the Vision major gifts initiative.

Donors from around the nation came together to support Cumberland’s first online fundraising event. The money raised will go towards the Ignite the Vision major gifts initiate, supporting the Phoenix Scholars, The Phoenix Marching Band, The Phillips Dining Hall Expansion and Memorial Lawn Enhancements.

“We are thrilled with the incredible success of this four-day campaign and grateful to all who contributed,” said Scott Lawrence, vice president for Advancement. “This type of fundraising initiative has become very popular for higher education institutions and demonstrates that every gift matters, regardless of the amount. Those who benefit the most from this campaign are the students who will be impacted by the generous donations from the Cumberland family.”

Cumberland is thankful to every donor who participated in this exciting and productive fundraising event.

To learn more about the initiatives or to make a donation go to www.cumberland.edu/ignitethevision/. For more information on Ignite the Vision or #IgniteCU contact the Office of Advancement at advancement@cumberland.edu or 615-547-1269.