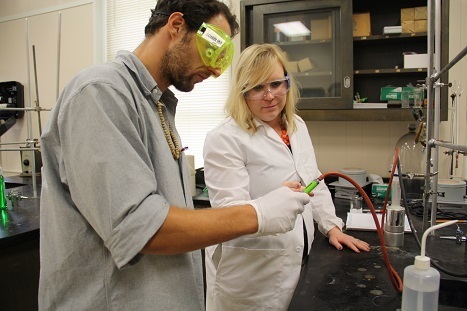 Roland Landers, a Biochemistry and Biology major from Murfreesboro, is researching the presence of the cancerous compound formaldehyde in vapor produced by electronic cigarettes (e-cigs) with Dr. Sarah Pierce, Assistant Professor of Chemistry. He presented his findings recently at Cumberland University’s Colloquium and plans to present at a national analytical chemistry conference in March.

An e-cig vaporizes an oil-based solution that contains various flavors and fat-soluble molecules like nicotine or tetrahydrocannabinol (THC). They have been marketed as a safer, healthier alternative to smoking cigarettes. Their popularity can be seen in the large number of “vape” shops that have opened in the last few years.

“The purpose of our research here at Cumberland University was to develop an effective and accurate means for detecting formaldehyde in electronic cigarette vapor as well as to deduce the independent variable associated with formaldehyde’s presence in the cigarette vapor,” said Landers.

“Once it was established that we could both detect and produce formaldehyde in e-cig vapor, the next step was to establish cause for its presence,” Landers said.

Landers says the other variables he will be testing include the voltage output of e-cigs, various brands of e-juice, and different concentrations of the ingredients that make up the e-juice.

Landers has been invited to present his research findings at The Pittsburgh Conference on Analytical Chemistry and Applied Spectroscopy or more commonly known as Pittcon.

“I am particularly proud that Roland was accepted to present at Pittcon.  To my knowledge, Cumberland has never had a student present at this prestigious analytical chemistry conference,” said Pierce.