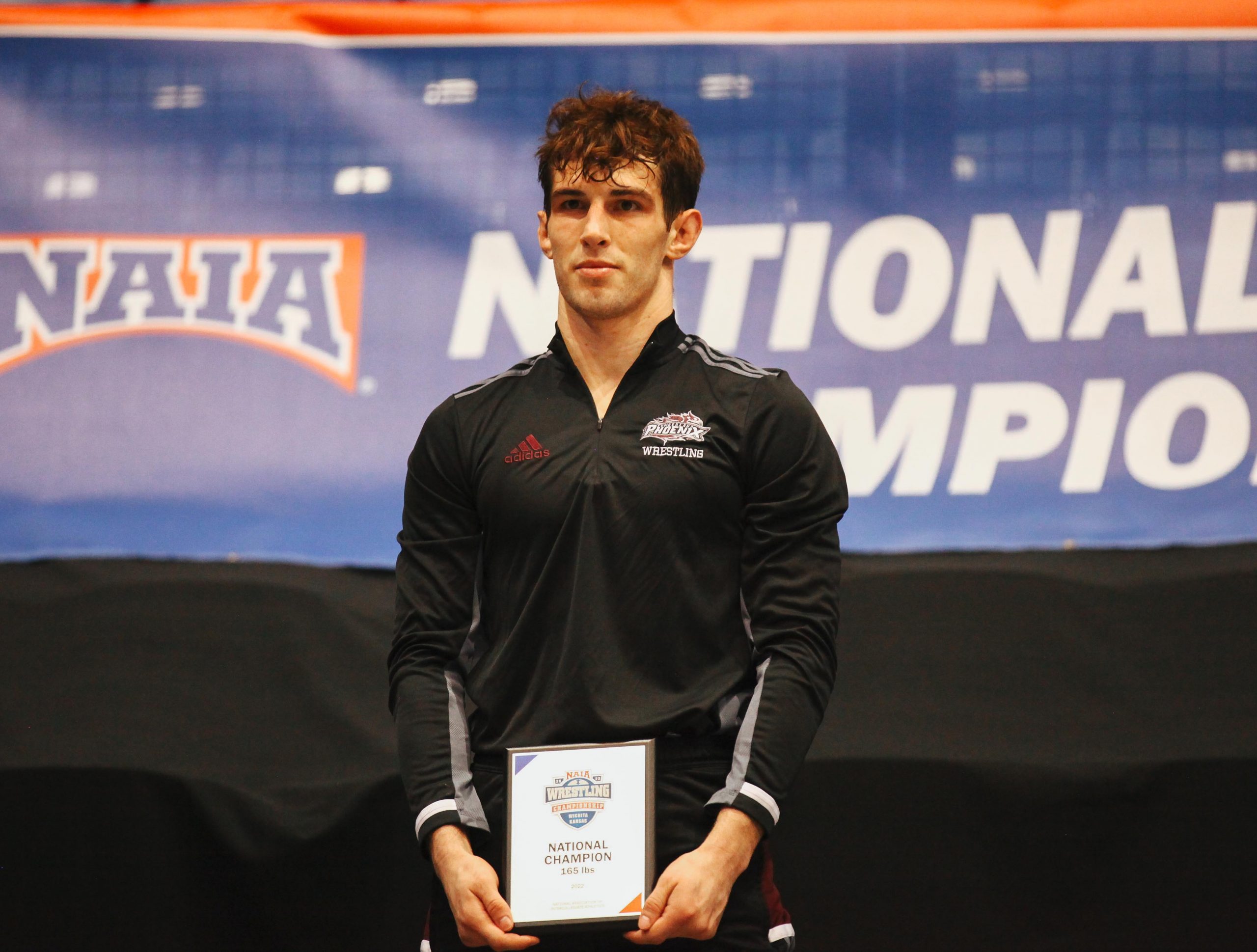 Cumberland’s Cole Smith put on a show in a thrilling come from behind victory to pin No. 3, Marty Margolis of Grand View, to win the 165 lb. weight class title at the 65th NAIA Wrestling National Championship on Saturday night.

The victory marks the first time a Phoenix wrestler has won an individual National Championship since Jake Williams won the 149 pound class in 2015.

Margolis and Smith met once before this season at the NWCA National Duals, where Smith won the match 5-2 by decision. Leading up to the National Championship match, Smith won his first two matches of the tournament by pin and the next two by decision.

Margolis had Smith’s number in the first period, taking Smith down two times and recording a four-point near fall to lead 8-0. Smith, the sophomore from Channohan, Ill., regathered after the first period and could not be stopped in the second.

“I just had a feeling after going down 8-0 that I was still going to win,” Smith said. “I heard the Grand View fans getting really loud after the end of the first period, and I just had to get my head back in it.”

He looked unphased by the deficit to start the second period, and the momentum shifted in his direction quickly. Smith got up off the bottom to end Margolis’ riding time and get an escape to trail 8-1.

Margolis started to get aggressive with his moves, leading to Smith putting him on his stomach with a takedown. Smith found a weak spot under the arm and flipped him on his back, pinning him at the 4:08 mark in the match to seal the National Championship victory.

The normally calm and collected Smith erupted into celebration and immediately ran to give Head Coach James Hicks and Assistant Coach Tyler Smith hugs, as the Hartman Arena erupted in cheers for what was an exciting come from behind victory.

“He’s a machine man, no one in the country can stick with him for seven minutes,” said Hicks. “Once Smith got back to his feet and got that takedown, I knew we had him.”

Smith is the fourth Phoenix wrestler to win an individual title after Keith Cupp in 2005, Corey Bleaken in 2011, and Jake Williams in 2014 and 2015. He is also the first Individual National Champion for Coach Hicks since he took over the program in March 2015.

Smith’s win also catapulted the Phoenix up the team standings from 11th place to an eighth-place finish with 51.5 points.

The win marks the end of Cumberland’s season and returns to the mat in the winter of 2022.