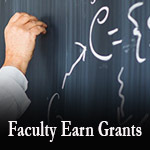 “There were many submissions reflecting the many and varied interests of the faculty. A scoring process was developed in which each proposal was separately evaluated by five individuals based on its perceived impact on students, faculty development, and institutional reputation,” said C. William McKee, vice president, academic affairs and professor, education and public service management.

The combined scores of the evaluators determined which proposals were funded. More than $9,600 was awarded. The winning submissions: