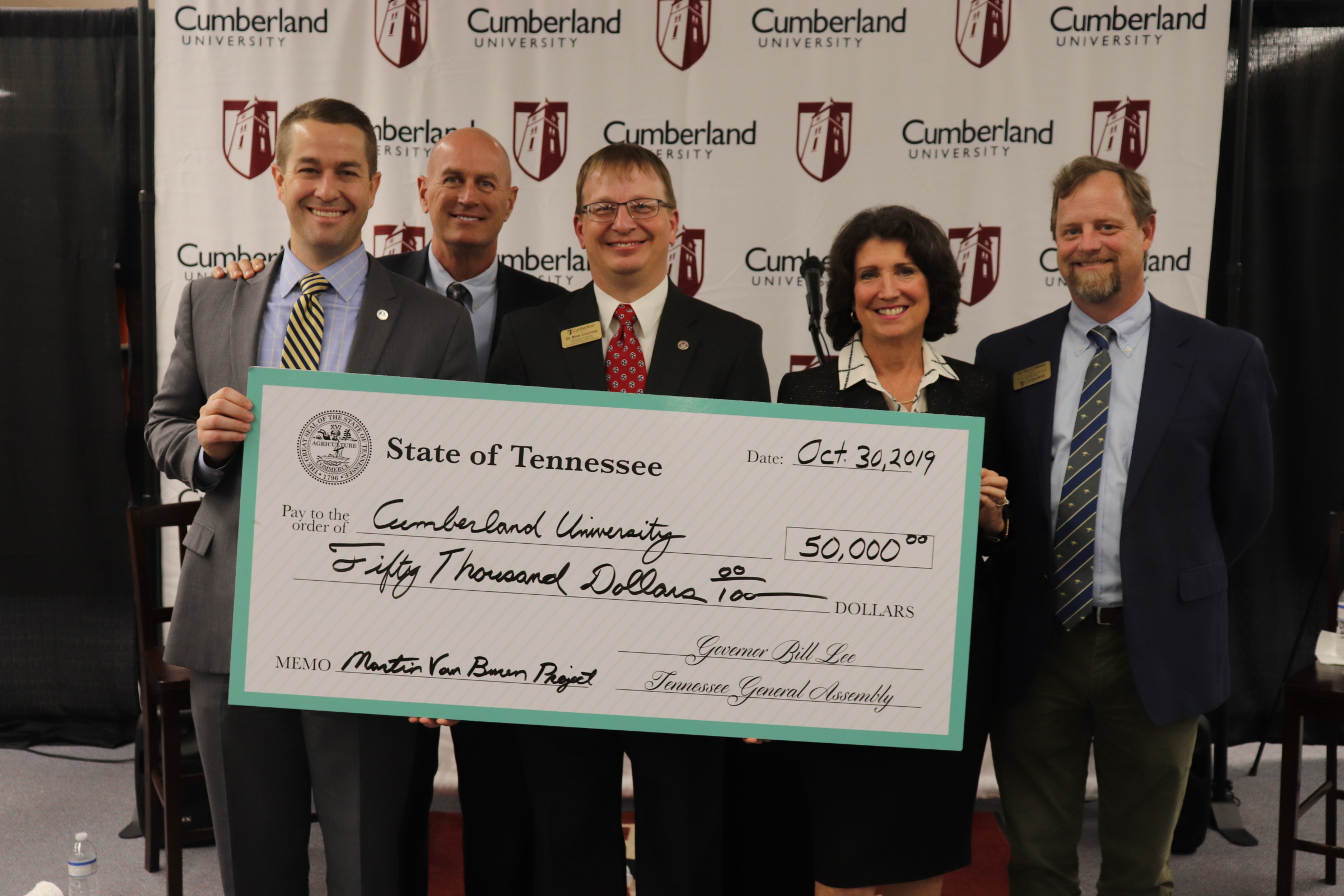 State Representatives Susan Lynn and Clark Boyd presented Cumberland University with a ceremonial check for $50,000 to help fund the ongoing work of Papers of Martin Van Buren project at the school.

The funding is a direct appropriation from state government spearheaded by Lynn and Boyd.

The Papers of Martin Van Buren is a joint digital and print project that will make accessible approximately 13,000 documents belonging to the eighth president. Cumberland University is the smallest university in the U.S. with an active  presidential papers project.

“We deeply appreciate the support of our state representatives for this unique, important project,” Cumberland University President Dr. Paul Stumb said. “The Papers of Martin Van Buren is helping to document one of the most fascinating periods in our country’s political history. The work is being done right here in Lebanon, and we are proud to be one of the few universities in the U.S. pursuing such an ambitious project.”

The check presentation was made at an event on campus where Lynn and Boyd spoke to Cumberland University students about leadership and state government in a session moderated by Stumb.

Lynn, chair of the House Finance, Ways and Means Committee, said the project was deserving of state funding, noting the non-profit university was taking on an enormous task with great public value.

“Cumberland University is providing a true service by taking on such a difficult research project about a crucial time in our nation’s history. It is important that we understand our history as a nation, and this project will have a deep impact on how we view the past so that we can understand the present,” Lynn said.

Boyd, chair of the House Consumer and Human Resources Committee, noted the project helps elevate higher education in the state as well as the profile of Wilson County.

“This work is being done right here in Lebanon, and it speaks to the vision and leadership at Cumberland University as well as the positive direction of the Wilson County community,” Boyd said. “Great things are happening in this county, and we are proud to assist Cumberland University in their continued pursuit of this important historical work.”

The Papers of Martin Van Buren is led by Dr. Mark Cheathem, professor of history at Cumberland University, along with New York independent scholar, James Bradley. They are partnering with the University of Virginia’s Center for Digital Editing to make President Van Buren’s letters, speeches, notes, and miscellaneous material accessible to the public and scholars alike.

The Papers of Martin Van Buren chronicle the influential life of the U.S. president who served from 1837-1841 and cast light on the birth of the two-party political system. For nearly half a century, Martin Van Buren was one of the nation’s most famous and influential politicians, wielding power at every level of government as a lawyer, legislator, diplomat, and chief executive.

For more information about The Papers of Martin Van Buren visit http://vanburenpapers.org/