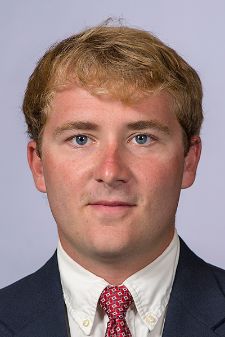 Assistant Baseball Coach
Work Email: bentleyjones@cumberland.edu
Location: CU Baseball Field
Category: Staff
Department: Athletic Department
Degrees:
A.S., Dyersburg State Community College
B.S., Cumberland University
Bio:
Bentley Jones is beginning his second year with the Phoenix coaching staff and his first in a full-time capacity after being promoted from graduate assistant to an assistant coach in January 2021.  Jones is primarily responsible for coaching the team's catchers and baserunners. Jones was a catcher in his own right, throwing out 31% of base stealers his senior season at CU. As the baserunning coach, he helped Cumberland improve their efficiency swiping bags in the shortened season last year while the team was on pace to surpass the number of steals they had in 2019. He also assists in recruiting efforts for the program. Jones started his playing career at Dyersburg State Community College and made a stop at Wright State before coming to Cumberland. At Dyersburg State, Jones played in 46 games as a Freshman, where he hit .295 while also helping lead the pitching staff to 39 wins behind the plate.  As a sophomore, Jones helped the Eagles make a strong push towards a National Championship. He led a high-powered offense hitting .415 on the season while only striking out 14 times, playing in all 56 games.  After a brief stint at Wright State, Jones finished his senior season strong at Cumberland where he hit .331 and helped lead the Phoenix to a runner-up position in the Mid-South Conference Tournament. Jones garnered Second Team All Mid-South Conference award for his efforts last season.  Jones graduated with a Bachelor of Science in Health and Human Performance and is currently working towards a Master’s Degree in Sport Management.