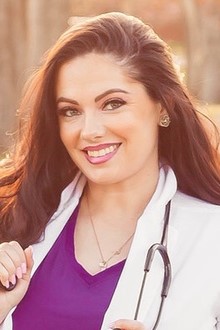 Amanda Brockman attended Cumberland University as a student athlete for volleyball and cheerleading beginning in 2008. She graduated in 2012 with a Bachelor of Science in Nursing. She began her nursing career as an ER nurse, and later joined the first Trauma Team at Skyline Medical Center. She decided to further her education and went to Roane State to become a flight nurse.

However, in 2015, she decided to change plans and move to St. Thomas Rutherford Hospital to potentially help them develop a Level 2 Trauma Center. While at St. Thomas, her role advanced into a critical care float RN traveling to cover ER, Trauma, and ICU departments within Ascension. She also became certified as a Sexual Assault Nurse Examiner performing forensic exams of sexual assault patients in Rutherford and surrounding counties.

In 2016, Amanda received her Masters of Science as a Family Nurse Practitioner. For the first year, she focused her advanced nursing practice on clinical education for WKU, MTSU, and Cumberland University, while maintaining her roles at St. Thomas.

In 2018, She took a family nurse practitioner role in a walk-in clinic. She currently works as the clinic manager and nurse practitioner for the walk in clinic, a Sexual Assault Nurse Examiner for the hospital, and a Clinical Educator for Cumberland University. Her future endeavors include learning a few languages and receiving her Doctorate of Nursing Practice.